Receptionist robot could bring a human touch to reception

The true potential of robots is still unknown. On one hand, those who work in industries which risk automation are fearful, viewing robots as a real threat to their jobs. Othe other hand, those who do not come into direct contact with robots simply do not see or notice these complex machines.

It is for these reasons that the Elf robot, installed in the hall of the Hotel Lovere, in Bergamo, arouses different emotions among guests.

“Foreigners are curious and interested, Italians are indifferent. Of all the visitors, children interact with the robot the most as they see the Elf as a game.” Orietta Casali, director of the hotel, sums up the first months of having this regular guest in the lobby: “Foreigners of all ages are more interested in seeing what the robot does – its functions, the questions it’s able to answer, etc. – since the robot is programmed to respond in both Italian and in English. Italians, on the other hand, interact with the Elf very little.” 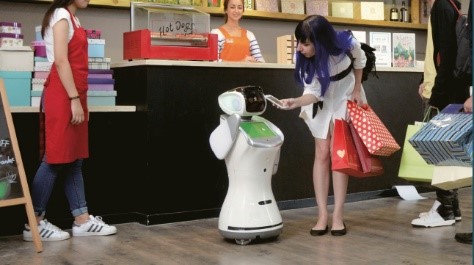 Meet Elf at the reception

The robot was purchased by the hotel in fall 2018 to provide tourist information on the territory of Lovere, its surroundings, and the hotel services. “It does not replace the hotel staff in any way,” Casali reassures. “It is supportive, but cannot replace the most ‘human’ aspect of reception. Located at the entrance of the structure, it acts like a reception in the sense that it addressed any initial, basic questions. It was welcomed by staff, actually and, being ‘female’ named Joy by a colleague.”

The retail robot is also useful for data collection in order to optimize work at the hotel. “In the cloud, we can see which questions have been most frequently asked by guests, the questions Elf wasn’t able to answer, and so on. Thanks to the data analysis enabled by the Elf, we can now see if people frequently ask about restaurants, for example. If so, it could mean that information provided about restaurants is not very clear or accessible to guests. Every day we learn from interactions between the robot and customers.”

Elf is still undergoing experimentation at the Hotel Lovere, but there are already several new ideas for its application: “On one hand we are evaluating whether or not to program it for management and accounting control, which would aid the administrative aspect of the company (with registration of invoices, for example). On the other hand, we would like to install detectors in the corridors and in the common areas that communicate with the robot and provide it with a sort of virtual map within which Elf can move. The robot could then accompany the guests to specific room or bring them straight to the restaurant.” This type of ‘butler’ robot with accounting functions would then free the hotel staff from bureaucratic duties, allowing them to dedicate more time and attention to the essential, ‘human’ side of reception.